THE ETHNIC PRESIDENCY: HOW RACE DECIDES THE RACE TO THE WHITE HOUSE 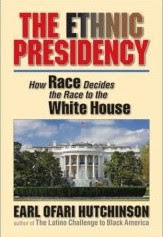 It is evident from the February 6th primaries that either Hillary Clinton or Barack Obama, or both, will be on the 2008 ballot for the Presidency of the U.S. There will be a lot of discussion in this race regarding whether or not Americans are ready and willing to accept a minority or female President. Will these candidates play into the hands of candidates like Chuck McCain or do they truly offer a viable alternative to a political system that has been dominated by white Anglo-Saxon and mostly protestant men?

In his latest book, The Ethnic Presidency: How Race Decides the Race to the White House by Earl Ofari Hutchinson we get an in-depth feel as to the role that ethnicity and race will play in the presidential election. The book is an explosive look at how racial and ethnic conflict has openly and covertly played a crucial role the past three decades in influencing, shaping and ultimately deciding who bags the world’s biggest political prize, the White House. It tells how racial politics will play an even bigger role in the 2008 presidential election and future elections.

It examines Obamamania, the Hillary and Bill factor, the soaring Latino vote, the silent but potent Asian-American vote, the immigration wars, the GOP’s love-hate relationship with black and Latino America, and Bush’s effort to recast the GOP from a clubby, ole white guys party to a party of racial diversity. The first primary is January 29.

Earl Ofari Hutchinson is an author, syndicated columnist, political analyst and commentator. He has been a frequent guest on Hannity and Colmes, The O’Reilly Factor, The Big Story, EXTRA, and numerous CNN News and Talk Shows.
He was a regular commentator on CNBC’s The Dennis Miller Show. He has been a guest on the Today Show, Dateline, The Lehrer Hour, and BET News, America’s Black Forum. He is a frequent commentator for the American Urban Broadcast Network and Ed Gordon’s News and Notes on NPR. He is a featured columnist for www.BlackNews. com, www.BlackAmericaWeb .com, and www.Alternet.org.
He is associate editor of New America Media. His op-ed columns appear in the Baltimore Sun, L.A. Times, Los Angeles Daily News, Washington Post, Chicago Tribune, Newsday, the Philadelphia Inquirer, the San Francisco Chronicle, and the Christian Science Monitor, and other major newspapers.

The presidential election in 2008 will be the most diverse and unusual the United States has ever had - what will it mean for the country and the residents of the US? The best way to learn about the ins and outs of this election is to read Mr. Hutchinson's newest book.

I had the opportunity to conduct a blog interview with Mr. Hutchinson and his responses to my questions were as follows:

1. Our nation is divided politically, socially and economically. Would a minority president heal those divisions or further polarize them?
Yes and No. Obama appears to represent ethnic bridge building and healing. This is welcome, but there are powerful political forces that have a vested interest, profit and belief in racial and ethnic, gender, sexual preference and religious discord. That has been the American ethic for two centuries. Change will come slowly, and will be fought tenaciously, one man alone can't do it.

2. All candidates promise change in the status quo and, if elected, an end to the influence of power brokers. It seems that if a minority president is elected, it will be because of power brokers and their influence would actually increase in D.C. They may be different people, but the end result is the same. How can any of these candidates possibly avoid the influence of these groups which may be responsible for their success in the election?

They can't. Money is the mother's milk of politics and elections. Lobbyists and fat cat corporate interests will continue to dominate and influence the political agenda. A president committed to reversing that will need to have the political intestinal fortitude to say no to special interests, to mean it and to stick to his word.

3. Can a minority president govern? Winning the White House is one thing but winning a House and Senate majority, as we have seen, is quite another. There is no doubt that certain political forces will gather in these chambers if a minority candidate is elected to thwart their every move. Will we be so embattled with domestic in-fighting that the world will soon pass us by?
Yes and he doesn't have to be a minority president for that to happen, It happened with Clinton and Bush. The same will happen to Obama especially when he pushes for universal health care, to end the war, and to get the money for massive spending on jobs, education and the infrastructure.

4. This is a question that few dare to ask. How long can a minority president survive before extreme elements in our own society decide that they cannot tolerate such a leader? Is the Secret Service that good?
They don't need to physically assassinate him. They can simply politically emasculate and befuddle him which is tantamount to physical elimination without needing to use a bullet.

5. Will the minorities actually go to the polls and vote?
Yes, but minorities alone don't elect presidents -- not yet anyway. White males still make up almost forty percent of the electorate. Obama can only win if he can assemble a modern day updated, non-confrontational Rainbow Coalition.


For much more information about Earl Ofari Hutchinson and The Ethnic Presidency, feel free to visit his virtual book tour web page - http://www.inspiredauthor.com/promotion/Earl+Hutchinson+-+Feb+2008.
Posted by Philip F. Harris at 1:29 PM