What is it about windrows? 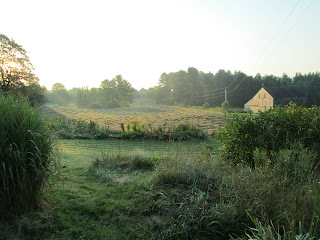 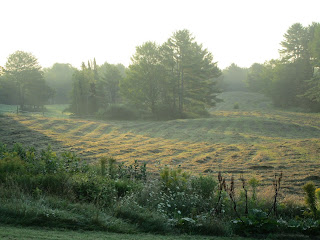 Pass by a field with windrows and one senses a feeling of peace and calm. Why? Even if you have never farmed or even visited a farm, there is something calming about those rows of hay.

Windrows offer a promise. A promise that you are prepared for what is to come. That despite the snow, sleet, or hail, all will be well. The barn becomes full of that sweet aroma of mixed grasses and whatever winter may bring, all is well. The field is ripe with harvest; the animals will be cared for; and, all is right with the world.

Perhaps the rows that follow and adjust to natures terrain serve as a lesson to us all. When we are in harmony with all of life, all that surrounds us, we can rest assured that all is well if we just take the time to stop and examine the peace that surrounds us all.
Posted by Philip F. Harris at 9:02 AM No comments:

It has been an interesting summer to observe climate change and its effects. We had a cold wet spring and still had to run heat into mid-June. It was impossible to plant a garden on the traditional Memorial Day weekend. Fortunately, we started plants in the house, but actually got a picking of beans before the plants could go out.

Barn swallows were very late in coming. In 2012 I had some 40+ hatchlings in the barn. This year, 8. Humming birds showed up very late and in fewer quantities. Then we had some record breaking heat. In 2012, by August it sounded like walking on snow going to the barn, the grass was quite brown. This summer, it seems like I'm mowing the lawn every other day. Not that we have had tons of rain, but it comes every few days. In 2012, our barn was stuffed with hay by the end of June ... good thing as it all dried up in the fields later. This year, the constant wetness made fields how to mow and dry but finally got some in the first of August. Still need round bales, but also need a stretch of dry weather.

After out heat wave, the summer has been quite cool. There have been 40-50 degree nights and highs in the 60s/70s more often than not.

Back to the garden, finally did get stuff planted. The weather has been kind to squash; peas got mostly burnt out; tomatoes have done well; but the beans have been under constant attack from hordes of Japanese Beetles. We spray a mix of water and Castille soap 3-5 times a day. It kills them, but does not keep them from coming back.

The extended forecast calls for temps in the 50's nights, 70s days. Not what I would call the traditional 'dog days' of summer. Hopefully this isn't a harbinger of an early, cold winter. Ouch for the heating budget.

So yeah, things are different and the climate has gotten very unpredictable. How about you?
Posted by Philip F. Harris at 11:25 AM 1 comment:

What is Agenda 21? The following will give you a quick reference: http://en.wikipedia.org/wiki/Agenda_21 Then there's this: If you Google this topic, it is amazing how divided people are on this issue. From this will create Huxley's Brave New World to this is what is needed for humanity to survive. One world dictatorship? The key to a sustainable future? Is climate change being ignored so that people will demand Agenda 21? Is it all a Wall Street conspiracy? Does anyone, other than the extreme right and left, even care? One thing is certain. Technology is in place that can monitor all that you do. Massive climate change may force people to demand that governments do 'something' to cope with catastrophe. Most people are apathetic to the issue. What do you think you can bake with these ingredients?
Posted by Philip F. Harris at 9:01 AM No comments: