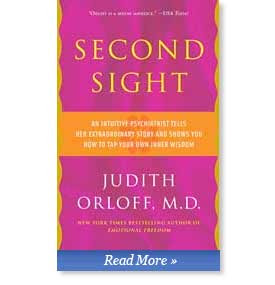 THIS IS A TIME WHEN WE COULD ALL STAND FOR SOME HEALING. LET JUDITH ORLOFF HELP YOU!

In this moving personal story Dr. Orloff recounts her "journey to become whole" by first accepting and then embracing her intuitive abilities. She tells of her childhood fear of her intuition, of her physician-parents' efforts to ignore and even deny them, and of her slow awakening to the understanding that her intuition is truly a gift. She tells of her struggle to incorporate her abilities into her practice and of the many successes she's experienced with patients ever since. Second Sight is a soulful and friendly bestseller.

Text from the back cover

As a child, her vivid dreams and intuitions were whispered about behind closed doors. As a medical student, she denied the "shameful secret" by immersing herself in the absolutes of science. Then as a psychiatrist, Dr. Judith Orloff recieved proof of the value of her gift when an intuition foretold a patient's suicide attempt. In this remarkable self-portrait, she takes you on the journey of a lifetime, one that brought her from ignorance to understanding, from loneliness to peace, from despair to hope...

NOW SHE TEACHES YOU HOW TO UNCOVER YOUR INTUITIVE GIFTS

“There is no elite to which the gift belongs--the seeds have been planted in all of us....each one of us is multifaceted, radiant, teeming with possibilities.”
As she tells you her own story, Dr. Judith Orloff will teach you how to recognize intuitive experiences in everyday life, awaken your own intuition with special mind-empowering exercises, and use meditation, prayer, and dream interpretation to broaden your possibilities. And like Dr. Orloff you'll soon be on a quest to reexamine your life, your beliefs, your future...and your own wonderous potential.
GET your copy of Second Sight ON MARCH 1st and receive 80+ GIfts from amazing teachers such as Dr. Joan Borysenko, Rev. Michael Beckwith, and Deepak Chopra, and Shirley MacLaine at http://www.drjudithorloff.com/second-sight-promotion/

Judith Orloff MD is author of the new book SECOND SIGHT: AN INTUITIVE PSYCHIATRIST TELLS HER STORY AND SHOWS YOU HOW TO TAP YOUR OWN INNER WISDOM (Three Rivers Press, 2010 updated edition). Her other bestsellers are Emotional Freedom, Positive Energy, Intuitive Healing. Dr. Orloff synthesizes the pearls of traditional medicine with cutting edge knowledge of intuition, energy, and spirituality. She passionately believes that the future of medicine involves integrating all this wisdom to achieve emotional freedom and total wellness. For more inspiration and free articles visit www.drjudithorloff.com
Posted by Philip F. Harris at 12:56 PM No comments: Links to this post

SPECIAL INTERESTS AND THE "STATE OF CONFUSION" 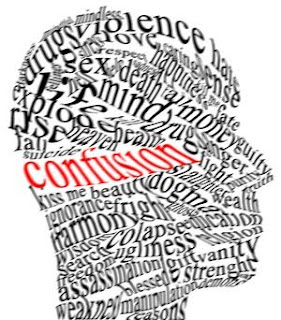 Perhaps the best way to defeat an opponent or to throw them off track is to create a state of confusion. It is a tactic that has been used since the beginning of civilization by religious leaders, political tyrants, politicians, corporations, political parties and just about any organized group seeking to further its own ends. In the time of Jesus, religious orthodoxy confused the people and the Romans by claiming that Jesus said that he was God. In World War I the Germans thought to confuse the allies by attacking France via Belgium. In World War II great efforts were made to convince the Nazis that the invasion would not occur at Normandy. Today, it is clear that corporations and special interests seek to confuse the public on a host of issues that they simply do not want to be addresses.

What is the best way to derail health care reform? Easy, claim that the proponents of such reform will take away benefits from the burgeoning ranks of senior citizens. Add to that a pinch of government death committees, claims of higher costs and lack of choice and the average person will shy back from any meaningful reform. Of course, such claims do not have to be true; they just need to make the headlines which are more than ready to accommodate sensationalists’ claims.

How about global warming and climate change? It is clear that special interests, the oil industry in particular, do not want to change their business and profit as usual method of operation. With ever mounting evidence that the planet is facing some kind of major change, the best strategy is to confuse the public, and even politicians, by condemning the data. Find one flaw, like the Himalayan glacial rate of melt, and then argue that all of the climate change data is wrong and suspect. Throw in a southern snow storm and one can easily argue, “See, the planet is getting cooler, not warmer.” It is like poor Johnny who gets one answer wrong on his test so the teacher assumes that all of the answers must be suspect also. Despite clear and irrefutable data and on–the-ground observations, corporations have managed to create an air of skepticism around any climate change or warning trend. They have managed to throw into the background any headline about all of the glaciers that are rapidly melting, loss of major water supplies, severity of storms and droughts, rising sea temperatures (December was the highest sea temperature on record), ocean acidification, crop failures, rising sea levels (even in Rhode Island and Florida), and growing climate chaos. By pointing to a couple of years of cool weather, they have managed to take any attention away from a temperature line that is still going up and up. Oh, did I mention the Northwest Passage and ice free arctic waters?

What about the economy? Moneyed interests have managed to steal billions of dollars from the public, make record high profits, pay ludicrous bonuses, foreclose on millions of homes, increase profits by not re-hiring and then getting away with putting holds on regulatory reform or any legislation that is geared to protecting the consumer. How do they manage this? Simply put, by confusing the issues. They claim that Obama is not creating jobs (How many people can he hire at the White House anyway?), his policies are anti-business and job growth (Of course they have no problem taking the billions for their own purposes), regulation would destroy the free market (What free market?), and that if you want the best, you’ve got to pay. Of course, it is the “best and the brightest” that created the economic mess in the first place.

The best part of “confusion” as a strategy is that what you say does not have to be true. You do not need supporting facts and figures. You do not have to justify your claims to the public or the politicians. You do not even really have to lie. All that is required is that you create skepticism and uncertainty. These conditions grind the decision making process to a halt. Few politicians will support a worthy and valid cause if, by some chance, they may be blamed if the cause becomes faulty. If you can create the question, “What if you are wrong,” then you have succeeded in toppling or paralyzing your opponent. It is easy to convince others to “take it slow,” and to be cautious, particularly if votes are involved.

The “State of Confusion” is a wonderful place for special interests. By raising the specter of possible error, such interests can achieve their goals and spend very little doing so. They can fund a study, put a scientist on the payroll, give a grant to a medical institution, or bankroll an economist to create doubt and inaction. One would think that with all of the information that is available, people could see through the smokescreen. Although, special interests can even flood the internet with confusing information. Perhaps if time was of no concern, this would not be as big an issue. But time lost means jobs lost, lives lost and a climate that might have a hard time supporting human habitation. Tick, tock. So how confused are you?
Posted by Philip F. Harris at 12:22 PM 2 comments: Links to this post