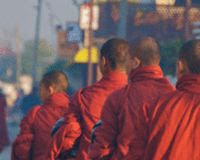 Just hours after the departure of a U.N. envoy, Myanmar's junta continued a violent crackdown on its own people.

We need to act now to protect monks, activists and innocent civilians from further abuses. Reportedly, more than 10 people have been killed, and thousands of pro-democracy protesters have been detained. "It is an emergency," said Paulo Sergio Pinheiro, the U.N. human rights investigator for Myanmar.

Myanmar has an appalling human rights record. Thousands of political prisoners are detained in deteriorating prison conditions and the use of child soldiers, forced labor, and torture are common.

The recent violence has shown the world the extent of Myanmar’s brutal crimes. Urge the United Nations to take urgent steps to get Myanmar’s junta to stop the crackdown.

Sign this petition and stand with the people of Burma.

I support the people of Burma.

After weeks of peaceful demonstrations, the military government has launched a violent crackdown, and I am deeply concerned about the well being of monks and civilians.

As stated by the UN Human Rights specialist on Myanmar, "this is an emergency" and we need to act now to stop these atrocities. The demonstrators in Myanmar have the right to peacefully express their opinion and the Government of Myanmar has a duty to fully respect this right.

I stand with the people of Burma and demand that the UN Security Council takes urgent steps to get the Myanmar military government to stop the violent crackdown on Buddhist monks and civilians and to address the peaceful political protests without violence.

Thank you for your attention to this urgent matter. Please act now before violence against innocent civilians escalates even further.
To the Top/Sign Petition
Email this petition to your friends