"A sovereign state is, in international law, a nonphysical juridical entity that is represented by one centralized government that has sovereignty over a geographic area. ... It is also normally understood that a sovereign state is neither dependent on nor subjected to any other power or state." 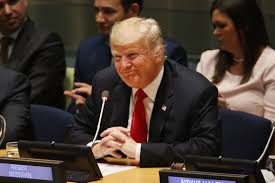 "Before U.S. President Donald Trump arrived in New York to deliver this year’s address to the United Nations General Assembly, his top national-security officials promised that he would affirm the importance of sovereignty in U.S. foreign policy and world affairs. As National Security Adviser John Bolton put it, Trump planned to “talk a lot about American sovereignty.”
He did, and that was precisely the problem. The president fails to recognize that sovereignty isn’t a one-way street — and that institutions like the UN, far from threatening sovereignty, in fact establish the conditions in which it can flourish." https://www.bloomberg.com/view/articles/2018-09-26/trump-s-united-nations-sovereignty-speech-missed-the-point

It is ironic that Trump proclaims sovreingty (which is every nations right), and then tries to tell Iran, China, Cuba, Venezuela, all the Europen nations, African nations, Japan, and just about everyone else to do what he wants them to do or be punished. Bully, sanctions, tarrifs all come to mind.

Do you see the problem with this?