RELIGION Vs. SCIENCE: THE DEBATE IS OVER? 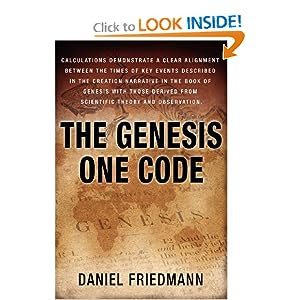 Large swaths of Americans seem to have drastically different views of how humans came to be, according to a June 2012 Gallup poll.
Nearly half of America – 46 percent – agrees with the creationist view that humans are purely the product of God, absent of evolution, within the last 10,000 years. Fifteen percent believe humans evolved independent of God, while the rest believe humans evolved with god guiding the process (http://www.gallup.com/poll/21814/evolution-creationism-intelligent-design.aspx)
These millions of Americans are pitted on two sides of a conflict which has a solution, as described in my new book The Genesis One Code. As an engineering physicist, CEO of the aerospace company known for building the space station’s robotic arm and student of religion I looked for a precise, unequivocal answer. Not good just arguments which hard to prove, but mathematical precision.
The creation-evolution conflict is a recurring point of contention in the United States, from the presidential election to what should be taught in schools.
I show that the religious and scientific wisdoms are two sides of the same coin and can enlighten each other. The reason the debate developed in the first place is because the discoveries of modern science of an old Earth seemed to conflict with descriptions in the Bible of a universe created in 6 days, only thousands of years ago.
The reality is that the Bible and science agree on the timeline for the development of the universe and life on Earth. The Bible is a blue print for the creation. I found the “scale used in the blue print” within the texts, the factor that converts “Creation time” to years as we know them, as measured by scientists. When applied to calculating the age of the universe and life on Earth, the Bible consistently matches scientific estimates derived from the study of fossil timelines, the solar system and the cosmos.
What’s the scale factor?  One creation day is — 1,000 X 365 X 7,000 – years! When those numbers are multiplied, each creation day is an epoch of 2.56 billion years, Using the formula, the biblical age of the universe is 13.74 billion years. Scientific estimates put the universe’s age at 13.75 billion, plus or minus 0.13 billion. Another 18 events described in Genesis, from the age of the sun to when first life appeared, match the scientific dates precisely!
If the Bible and science agree on what happened and when it happened, do we really have a conflict? It is time to reexamine and bury the conflict between science and religion. In fact, the book shows that Genesis has answers to science’s three biggest unanswered questions.
By continuing this false dichotomy of religion vs. science, we are severely limiting progress and our potential as humans.
.
Most of us have pondered our origins at some point in our lives. I am no different, except perhaps that I have both a strong scientific and a religious background.  Thus, when I ponder our origins I not only have to contend with two seemingly very different accounts of our universe; but with the knowledge that both are accurate, at least in terms of what happened and when it happened.  Christians are invited to see science as something that complements ones faith, not to see it as something that contradicts it.  Many Christians affirm God as the Creator and at the same time support the scientific study of creation. They recognize science as a legitimate interpretation of God’s natural world and affirm the validity of the claims of science in describing the natural world and in determining what is scientific. However they preclude science from making authoritative claims about theological issues.

I began my quest with knowledge gained from a basic religious upbringing and a high school science education. Both bodies of knowledge were fascinating, yet appeared incompatible. As I proceeded to obtain a scientific education, I initially came to think that science books answered everything. Yet, by my fourth year at university, some fundamental questions concerning our origins began to re-appear. In science texts, some answers were not available, some answers were strange, and some answers were so metaphysical they looked like religious answers. So, I went back to study religion to find deeper inner meaning. Answers began to appear.
So what did I find?  The Bible and science agree on what happened and when it happened with respect to the development of the universe and the appearance of life on earth.  Not just roughly but precisely.  That’s right! Very old religious documents contain what science has discovered in the past 50 years!
This was so exciting I decided to share my findings in a book,  The Genesis One Code was borne Canada’s leading newspaper describes the book as follows:
The book is engrossing. In it, Friedmann … is persuasive and devoid of insistence. In essence, he argues that, just as a blueprint provides a scale reference to the finished building, there is a mathematical scale that reconciles the events of Genesis to the findings of science.
About Daniel Friedmann
Daniel Friedmann is a student of the origin of the universe and life on earth both from the scientific and biblical perspectives. He is also a longtime student of religion and for the past 14 years has attended the Vancouver Kollel center for learning.  He is passionate about helping young adults put science and the Bible in correct context.Daniel Friedmann is currently CEO of Canada’s leading aerospace company which built the Canadarms, and is involved in space exploration and the Hubble telescope. He is a professional engineer and holds a master’s degree in engineering physics.The Genesis One Code is currently available onhttp://www.amazon.com/Genesis-One-Code-Daniel-Friedmann/dp/1935764276/ “>Amazon.com and at http://danielfriedmannbooks.com/.
Posted by Philip F. Harris at 5:56 PM

Interesting article, a book from a science and religious perspective. Great discussion for teens and families.

Utterly agree, I have a blog that is based on science & spirituality myself.