THE LOST BOOK OF NOSTRADAMUS-PART II 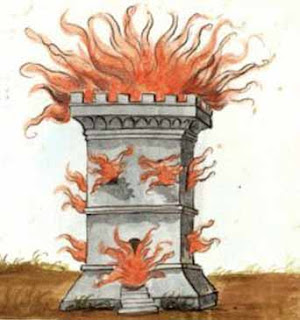 One thing must be clear from the outset; Nostradamus is not a purveyor of doom and gloom. He does not predict the end of the world nor does he foretell of the “second coming” of anyone. Regardless of the words, he does not believe in an anti-Christ. Nostradamus does not tell “all” in the quatrains, rather he reveals his mysteries in his symbols.

The quatrains are like the parables that are understood by the few. There inner truths reserved for the initiates. While many quibble over the meaning of the words, they fail to see the heart that lies beneath. The Universe speaks in images and symbols and Nostradamus was a tool of the Universe – he was an initiate of the highest order and it is to his symbols one must turn to grasp the rudiments of the words. They go hand-in-hand; they are the duality that shapes the entire manifest world.

Perhaps the biggest failure of most is their attempt to try to interpret his symbols from the perspective of religious dogma. While he had to use the words of the day and placate the powers that be, Nostradamus was not under the thumb of religious ideology. He knew how to play the game in order to keep his head. So much has been slipped under the nose of theocracy it is a wonder they have not seen the writing on the wall. There is a famous quote about pearls before swine and so few have really understood its meaning.

As I have said in my writings in the novel, WAKING GOD, certain symbols have been our guide for countless millennia. These symbols became what are commonly called the Tarot. While many will argue that the Tarot was a 16th century creation, that argument also falls under the category of those beautiful pearls. That Nostradamus used that symbology is indisputable. His real story is in the picture and not the text. However, if one uses Christian myth as the basis for interpreting those symbols, you are condemned to mire in the muck of ignorance.

It is little wonder that the Church created devils and demons to gain and maintain their power over the masses. All reasoning people would surely understand that stories of a vengeful god, filled with wrath and contempt for its creation would garner few converts unless they were threatened with eternal damnation for disobedience. The serpents and dragons of Nostradamus do not represent evil. That is merely a lie told by those trying to protect a lie. Certainly, anything that would expose that lie would be considered evil. To them, the “truth” is evil since it underpins their very foundation.

To begin to understand the inner message of Nostradamus, all religious connotations must be cast aside. Do not think of the images of the pope as necessarily being the literal pope. Do not see the serpent as evil, see it as wisdom. When Patrick drove the serpents from Ireland, what he really did was drive the Druids from their homeland. The serpent represents wisdom in the same way it did in the story of Moses. Is DNA involved in his images? In WAKING GOD we talk of the ‘good seed’ imbedded within our DNA and this reference is made in numerous Tarot pictographs. The wisdom of the awakening DNA was no stranger to Nostradamus. Beware of seeing the crescent moon as a symbol of Islam. It is important to note that it is often portrayed as a double image. This deals not only with the inner and hidden meaning of Islam; it also deals with the Goddess whose Tarot card is number two. It is she who is the fount of wisdom. His many female images do not allude to foreshadowing a female pope, but rather to the return of the Goddess and all of her wisdom.

Contrary to very popular belief and error, the burning tower does not represent the end of the world. The tower is man’s dogma undergoing purification of the spiritual fire. This fire is often portrayed as destructive in religious circles, e.g the fires of hell and the lake of fire in Revelations. Contrary to this erroneous thinking, the alchemic fire gave birth to the universe and its purifying nature frees the mind from mental bondage. Even Jesus said he came to” baptize by fire.” I doubt he meant he wanted to burn everyone in the flames of Inquisition. Keeping in mind the importance of numbers and their meaning, note that the tower has three openings. The number three appears everywhere in the Tarot and in the plates of Nostradamus. Card three of the Tarot is the Empress, the Goddess, who gives birth to wisdom. She has one foot on a crescent moon and her crown is adorned by 12 stars. Card 12 is the hanged man who, by reversing his thinking is awakened to the inner truths of the Universe. His coat displays two crescent moons.
***
This is the second piece of a multi-part article on THE LOST BOOK OF NOSTRADAMUS.
Posted by Philip F. Harris at 9:41 PM

Email ThisBlogThis!Share to TwitterShare to FacebookShare to Pinterest
Labels: NOSTRADAMUS

Hi. I think your post is great. I do think, though, that Nostradamus, being brought up in both a Jewish as well as a Christian backround, did believe and did write about the Second Coming of Christ, which I believe has already happened. In Century VIII. 38 Nostradamus writes:

"The King of Blois shall reign in Avignon,
Once more he shall be the sole ruler of his people,
He will build his wall on the land that is bathed by the Rhone.
Fifth of his name, and last of his rank before the Second Coming of Christ."

This site is dedicated to showing how it is George Bush who Nostradamus prophesied as the King of Terror as well as the further prophecies for the coming future world civilization. thanks

HI, we're very thankful and we agree with your sensible and truthful interpretation of these facts, which deal with the "real" and the "official" truths certain circles have been trying to impose us through history.
We live in the farthest corner of the world, in Latin America, and we are eagerly looking forward to your next third part issue of this really relevant issue.