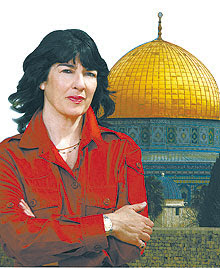 “God’s Warriors,” produced and recently aired by CNN should serve as a wake-up call to anyone wondering why the world is in such a state of political, social and religious turmoil. Based upon interviews conducted by Christiane Amanpour who traveled the globe to talk to Jewish, Muslim and Christian “warriors,” the documentary exposes why organized religions are one of the major divisive forces on the planet.

As the show stated, in their drive to save the world, these religions have caused deep divisions. While emphasis was placed upon the fundamentalist elements of these faiths, it is clear that even the mainstream is just as responsible for the great religious divide. According to Amanpour, fundamentalists in these various faiths have become a political force with the aim of re-making society in their own image and to bring God back into power over the affairs of man. With a campaign against the “evils’ modern secularism, their activities have created unprecedented fear and division.

The basic questions raised are obvious. If God does not impose its will upon humanity, what makes these people think they should do it for God? If each is acting according to some divine will, then why are they killing and condemning each other? Is there more than one divine will? In his review of the novel, “Waking God,” Christopher Friesen of BookPleasures.com asked, “What if every Truth you had ever been told was really a mosaic of falsehoods? What if every religious institution that preached salvation was actually an agent of oppression?” These topics are the focal point of that novel and they are the focal point of Amanpour’s reporting in “God’s Warriors.” It is taught that you cannot take heaven by force, yet, that is exactly what fundamentalists seem to be preaching.

What about the mainstream faithful? In each religion extremism is denounced by religious leaders. They say that they abhor the violence. While the words of denouncement come easy, you can certainly know them by their deeds. What are religious leaders doing to stop the violence and hatred? It would seem that very little is being done. If Muslim leaders condemned extremists’ actions and threatened to remove those guilty of such actions from the faith I would imagine we would see a great reduction in terrorism. If evangelical ministers proclaimed violent actions a sin and actively condemned such actions, perhaps there would be a little less hate. The problem is that both Christian and Muslim leaders are seeking to spread their ideas and impose their version of moral authority on the rest of the world. Judaism departs from the others in this category. In an essential elitist fashion, Jews do not seek to convert others or to spread their faith. They really just want to be left alone to live in peace in what they claim to be their Holy Land. Yes, they commit violent acts but not with the intent of converting the world to their faith.

In a book titled, “When the Church Leaves the Building,” by David Frederickson we see that there is a growing movement from those who are spiritually oriented to abandon the religions of their fathers. It is asked on their web site, familyroommedia.com “Is it possible that the Church Christ promised to build looks different than much of what we call 'church' today?” It is estimated that millions of former churchgoers have left the building in search of a more meaningful and personal relationship with their God. The growing disdain for the violence perpetuated by extremists and the lack of action to prevent such action by religious leaders may one day be their undoing.

Amanpour says that we must take note of the actions of religious extremists because they have infiltrated and in many cases control the political debate in many nations. In my mind, there is no question that she is right. These institutions are pitting brother against brother in a power struggle aimed at molding the world in their image. Their actions and words imply that Divine Intelligence is incapable of dealing with the affairs of man or that they are the arm of that Intelligence as “God’s Warriors.” What kind of God needs warriors? What kind of God would sanction car bombing women and children or blowing up health clinics? And, which God is right: the God of the Jews or the God of the Muslims? It makes no sense.

Bestselling author and inspirational speaker, Dr. John Demartini, in an interview printed in the new book, “Jesus Taught It, Too: The Early Roots of the Law of Attraction” had the following to say about religions: “When we subordinate ourselves to the religious system, we basically stop opening our religious heart. If there is a divine order, divine intelligence and divine love and divine wisdom and beauty in everything, then where is God not?” It is clear that “God’s Warriors” do not ascribe to this philosophy. Their passion for violence, hatred and contempt for those of differing opinions are typified in their actions and deeds. It is clear that we need to listen to the message that was contained in the CNN report. These people want and have power and will do anything to spread and impose their views on others. As a major character in the novel, “Waking God” says, “It is not about saving humanity and never has been.” What is required is a ‘great awakening’ where humanity begins to take responsibility for the world in which we live.
Posted by Philip F. Harris at 2:31 PM